My world was shaken on the morning of January 24, 2023 on hearing of the passing of Balkrishna Doshi, Indian master architect, Pritzker Laureate, and someone who has influenced me greatly, first from a distance, and then through knowing him personally as a mentor and friend over the last four decades.

The first time I encountered him in the flesh was in the mid-1970’s when I was an undergraduate student of architecture at School of Planning and Architecture in New Delhi and attended a lecture he delivered there. His reputation had preceded him. We knew he had begun his own practice in Ahmedabad in the mid-1950’s, and we entered the lecture hall that day as members of a generation of Indian architects who would follow in the footsteps of his generation, acknowledging him as one of the trailblazers shaping the architecture that would define India’s independence and modernity.

We knew his professional career had begun with an adventurous move to Paris in 1951 to work in the atelier of Le Corbusier, that master of 20th-century modern architecture, knowing nobody in that city while being a vegetarian who spoke no French. Yet he flourished, so when he returned to Ahmedabad, Corbusier trusted him to oversee the execution of four projects there. We knew Doshi as more than a pioneering architect, being an educator and institution builder, having established the Center for Environmental Planning and Technology (CEPT) in Ahmedabad as an internationally recognized site of excellence for innovative education and thought on architecture and urban planning.

In the lecture that day, which I still remember vividly, he presented two housing projects he had recently completed, both for public sector townships, as well as the first building of the CEPT campus. I was struck by the idealism and skill with which he deployed architecture to offer possibility and promise to its culture of inhabitation, while simultaneously seeking integrity with site and climate. Before that lecture, the only projects of Doshi’s I had known were the Institute of Indology and the Tagore Memorial Hall, both projects in a Corbusian idiom of exposed concrete and expressive form. 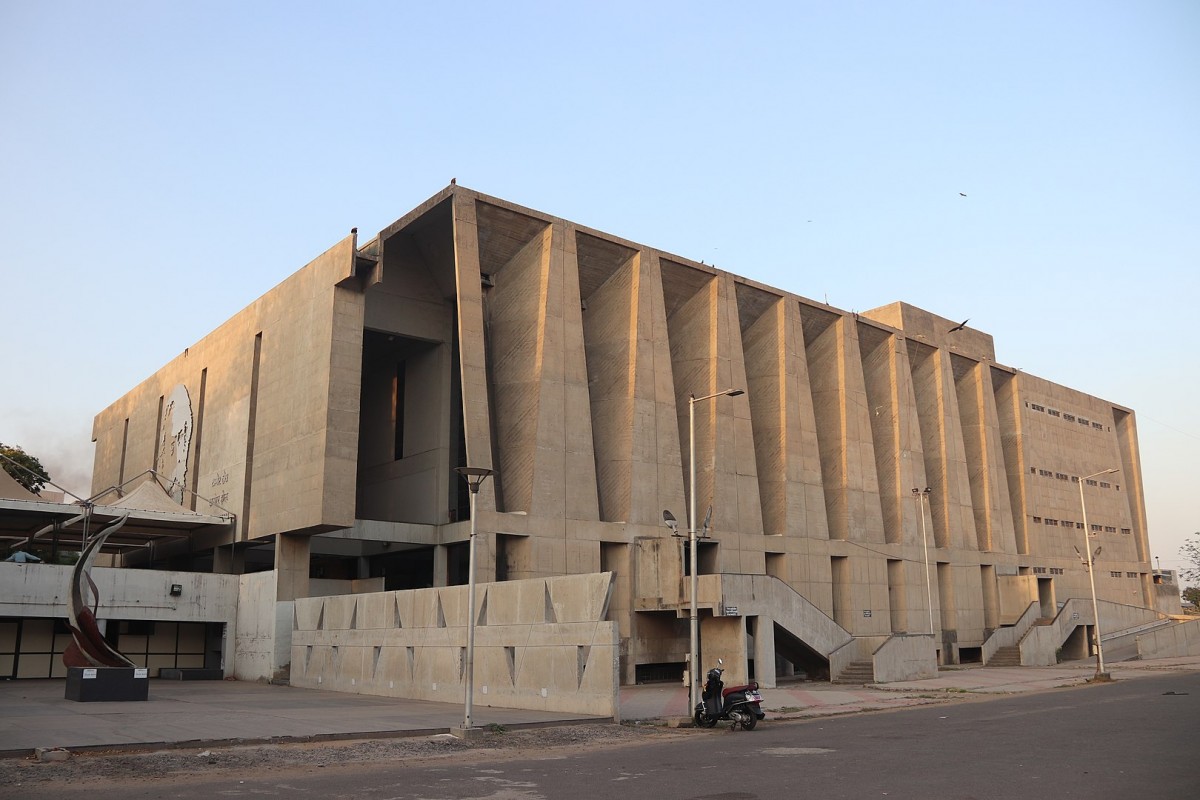 Corbusier’s Capitol Complex in Chandigarh, built in the late ’50’s and early ’60’s, had been a major influence on Indian architecture of the time, whose torchbearers had adopted it as the idiom of Indian modernism, a phase that continued until the mid to late 1970’s, and I had imagined Doshi to be in the same league. That day, I realized that although Doshi had a personal equation with Corbusier far closer than any of his peers, he was one of the first to change course after an early adoption of that idiom to adopt an architecture that emphasized space over form, focused on inhabitation over expression, seeking to be timeless rather than symbolizing the spirit of a time.

In the late 1970’s, this approach evolved to reach one of its most iconic expressions in the Academic Complex of Indian Institute of Management Bangalore (IIMB), an architecture inspired by precedents from history such as Fatehpur Sikri, an architecture meant to dissolve into its landscape , where interior experience took precedence over external appraisal offering a rich weave of light, scale, vista and texture. Spatial emphasis evolved in later work in a transcendental quest to dematerialize the physicality of architecture through strategies of burial, seen in projects such as Sangath (where Doshi’s practice was based), Amdavad ni Gufa (an underground juxtaposition of the architecture of Doshi and the art of MF Hussain), and the academic building for the National Institute of Fashion Technology. Aranya, a social housing project for the urban poor in Indore, broke away from the norm of an architect specifying and delivering a completed product to offer a material and spatial framework by which people could adapt their homes over time so that the housing could reflect the lives and aspirations being lived within it. I never had the opportunity to ask Doshi if he had read the philosophy of Martin Heidegger, but his architectural odyssey epitomised Heidegger’s definition of authentic dwelling as that which gathers the fourfold of earth, sky, mortals, and divinities.

Admiration for Doshi’s architecture took on a different dimension for me once I had the opportunity to know him the person. My first close encounter was in the early 1980’s when he visited Philadelphia to lecture at the University of Pennsylvania. My wife had recently graduated from that university and I, after graduating from another university, had recently joined her there. We invited Doshi to our home for dinner, and he readily accepted the invitation despite him being an internationally acknowledged master and my wife and I being fledgling architects. It was the second time he was doing this as on a visit a year earlier, before I arrived in Philadelphia, he had accepted an invitation from my wife. When he was in our home, he was spontaneously and disarmingly indifferent to differences in age or magnitude of achievement for he came with a sole agenda, one he lived every moment of his life, to enjoy himself. We laughed together, he shared his thoughts and experiences, he quizzed us on our beliefs and lives, and a good time was had by all.

Over the years, as I got to know him better, I learned this was his mode of discovery: to seize the day with open-eyed wonder, enthusiasm, and affection, soaking in all he saw as fodder for consistent reflection and creativity. He never went anywhere without a small spiral-bound notebook in his pocket in which he frequently documented thoughts and sketches. Whenever he attended a lecture, whether it was being given by a young architect or another master, he would listen attentively, taking copious notes.

In the 1980’s, a group of architects had formed in Bangalore, each having their own practice but meeting frequently to discuss architecture, share photographs of travel, travel together, and learn from each other. The group came to identify itself by the acronym ‘BASE’, and I became a member of this group on returning to Bangalore in 1986. Doshi would visit the city frequently in those days as construction was ongoing at the IIMB site. He would reach out on every visit, and at least one evening of his stay would be spent with the BASE group talking, sharing, collectively thinking. We felt privileged to receive attention from this great architect, only to find that his enthusiasm for discovery would often leave us in the shade. One late night after dinner, we were escorting him to where he was staying and passed by the construction site of a corporate office building, a striking modernist building with an enveloping screen wall of bush-hammered concrete, a material expression being seen for the first time in India. Doshi was curious to see it and asked that the car be stopped so he could get down for a closer look. We accompanied him, peeping politely over the compound wall, only to find that Doshi, far senior to most of us, had climbed on top of a section of the wall for his curiosity to learn demanded he get the best view possible. This energetic zest for life continued throughout his life. In 2011, when he was in his mid-80’s, he came to Bangalore for a launch of his book Paths Uncharted. We had the privilege of hosting him for that visit in our home in North Bangalore. The day after the book launch was a packed one. He started the day with a visit to a building in Central Bangalore designed by a former student. From there, he went on to catch up on developments at IIMB in South Bangalore, wandering around the expansive campus, and climbing the stairs to the top of the 30-metre-tall water tank tower to get an overview. From there, he visited Ranga Shankara, a vibrant space for theater and theater lovers that had opened a few years earlier, exploring the whole facility, including climbing onto the catwalk above the stage. He ended the day at a dinner in East Bangalore hosted in his honour. Returning home at close to midnight, he finally admitted to feeling “a little tired”. Of considerable significance is the fact that Kamala Doshi, his wife since 1955, kept pace with him through the day, and he was transparent on how her companionship was crucial to his being.

Perhaps, it is an incident in the mid-1980’s that reveals the essence of the person Doshi was. My mother was a member of a trust that had started a new school. Doshi dropped by to meet her and see the school, and she escorted him around it. Being a new school, it only had students from kindergarten to Standard 6. Describing his visit, my mother said she had taken many adults on tours of the school, but Doshi was the only one who considered it necessary to know the place from the child’s perspective. He visited every room, and in each room, he sat in a chair meant for little children and inhaled the aura of the room. This reveals two facets of its core. First, in every experience, you must discard convention and expectation to spontaneously seek empathy with its intrinsic authenticity. Second, the child you once were must never go away for if you lose that child, you lose the capacity for wonder.

Doshi was one of those rare individuals who retained the innocence of childhood, and one must not equate this innocence with naïveté. Rather, it is the absence of pre-conditions so that you revel in your experiences in the world in the pure essence of their being, opening yourself to the wonder of what they offer you. He did not fall into the trap that captures so many of us, where we cross a threshold into adulthood by allowing expectation and desire to shape us into a shield of artifice, where we define learning and accomplishment by how others certify our sophistication rather than measuring it by the joy of wonder we experience.

Joseph Campbell, the famous scholar of myth, said that we make a mistake thinking we seek the meaning of life, for what we truly seek is the rapture of being alive; feeling that rapture when we learn to discern in the world around us echoes of our innermost being. Doshi was a living embodiment of Campbell’s assertion. He taught me to escape the prison of esoteric theory and to eschew the temptations of temporal fashion. He showed us that if architecture is to have any value it must echo the inner being of its inhabitants, and that to get to know this one must look within. He demonstrated that teaching is not about offering pearls of wisdom, for it depends more on how successfully you infect others with your passion, values, and commitment. He lived the aphorism of the Isha Upanishad, “Let go and rejoice!” His life manifested that the adult is not differentiated from the child by worldly sophistication but by the degree of rigor acquired in exploring how to be a good human being, a rigor that leads to the mastery of wonder.

Doshi is no longer physically with us, but in these lessons his spirit continues to dance in our midst. We must acclaim his accomplishments, acknowledging the excellence of his work as deserving of the recognition it received, including architecture’s highest international award, the Pritzker Prize. But we must also be able to look beyond that, see Doshi the person, discern the dance of his spirit and learn to move to its beat.

Prem Chandavarkar is an architect.