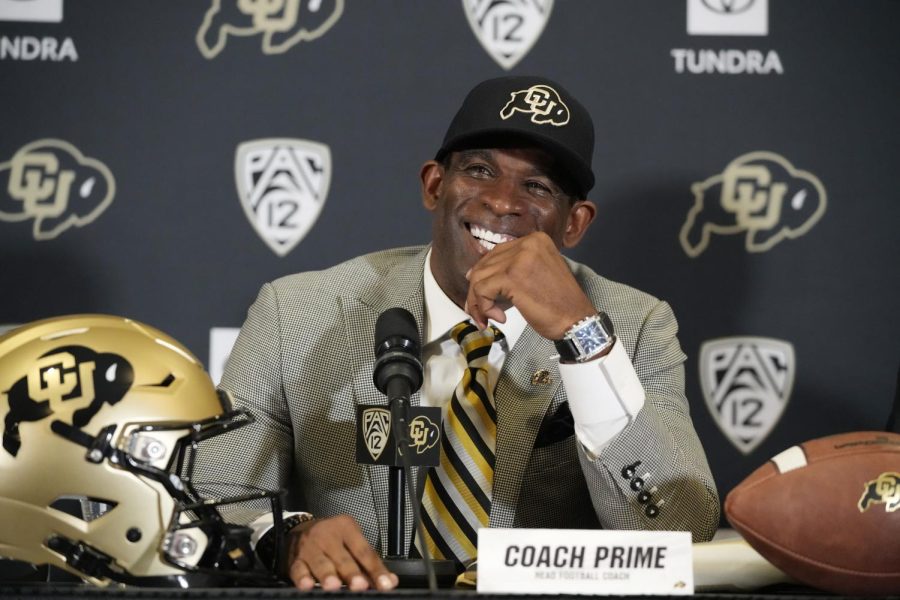 Deion Sanders speaks after being introduced as the new head football coach at the University of Colorado during a news conference Sunday, Dec. 4, 2022, in Boulder, Colorado.

Just a few months ago, Deion Sanders was one of the most beloved figures in college football. From dominating at Florida State to rising to the top of the NFL and MLB, “Prime Time” solidified himself as one of the most iconic athletes of all time.

Then Sanders moved into a new profession — coaching. In 2020, Sanders accepted a job as the head football coach of Jackson State. Over the course of his tenure, “Coach Prime” took a small, relatively unknown HBCU and turned it into a national powerhouse. With his energetic personality, Sanders won over the hearts and minds of his players and the nation alike.

But his status as college football’s most admired coach was short-lived.

Late last year, Sanders announced his decision to leave Jackson State for Colorado. In the exciting weeks, Sanders took heat for his transition to Colorado.

But the problem with Sanders’ move isn’t that he left Jackson State, as he has no obligation to stay with the HBCU. Rather, the problem is what Sanders did in his first weeks with the Buffalos.

In a recorded team meeting with returning players, Sanders made his intentions for the program clear.

“I’m coming,” Sander said in the video. “And when I get there, it’s gonna be changed. So I want y’all to get ready to go ahead and jump into that [transfer] portal and do whatever you’re gonna get because the more of you jump into the portal, the more room you make. Because we bring kids that are smart, tough.”

After encouraging his new team to leave the program, Sanders then introduced his son, Shedeur Sanders, as the team’s new quarterback, despite the fact that Shedeur was still on Jackson State’s roster and had not yet entered the transfer portal.

Speaking of the transfer portal, Sanders made significant use of the tool in his first weeks with the Buffs. As of Dec. 28, 14 players announced their intention to transfer to Colorado. Former No. 1 recruit and Jackson State standout Travis Hunter became Sanders’ biggest pickup in the portal. The first-year cornerback originally committed to Jackson State because of Sanders, so the move to Colorado was expected.

Considering Sanders’ blatant nepotism and brutal honesty toward his new players, it is easy to see why the nation is changing its opinion on Coach Prime. But does Sanders truly deserve the hate?

Here’s an uncomfortable truth — college football is facing an image problem. Between massive NIL deals and borderline tampering in the transfer portal, the realm of college football looks more and more corrupt as time passes. But this issue started long before Sanders made the move to Boulder, Colorado. Sanders just highlights the worst parts of the current state of college football.

Does Sanders take advantage of the horrendous state of the NCAA transfer portal? Absolutely. Colorado assembled one of the best transfer recruiting classes in the nation this season. Many recruits, including Hunter, were attracted to Sanders’ large personality and star status. Sanders should not face blame for taking advantage of an already flawed system. But he does bring attention to what needs fixing.

On top of his use of the transfer portal, Sanders received hate for leaving Jackson State in favor of Colorado. While this case involves more than just a job change, it does bring attention to an overall loyalty issue in the NCAA. From Lincoln Riley to Brian Kelly, there is a serious issue with coaches leaving schools prematurely. Gone are the days where coaches like Alabama’s ‘Bear’ Bryant would spend decades at the same university.

Still, Sanders is not at fault for the volatile nature of college coaching changes, nor any other problem plaguing college football. Nevertheless, Sanders’ recent moves at Colorado point to one conclusion — college football is broken.