Students at the Jamia Millia Islamia University are planning to screen the controversial BBC documentary on Prime Minister Narendra Modi today at 6 pm. 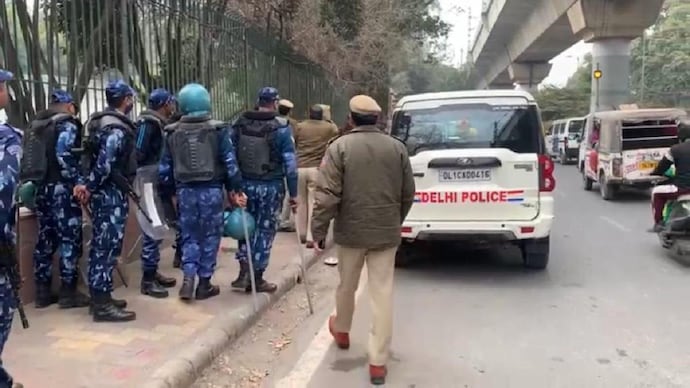 By India Today Web Desk: Delhi’s Jamia Millia Islamia is likely to screen the BBC documentary on Prime Minister Narendra Modi today. According to the details, the university is planning to screen the documentary ‘India: The Modi Question’ at 6 pm.

Meanwhile, four students were detained for allegedly creating a ruckus outside Jamia Milia Islamia University over the screening of the BBC documentary today, the Delhi Police said.

Azeez has been taken to Sukhdev Vihar Police Station, he said.

Security around the university has been tightened.

This comes despite a prior notice by the university administration, asking students to refrain from screening the BBC documentary.

“This is to reiterate that no meeting/gathering of students shall be allowed in any part of the campus including lawns and gates without prior permission of the competent authority, failing which strict disciplinary action shall be taken against the organizers,” the notice read.

The two-part BBC documentary “India: The Modi Question” claims it investigated certain aspects relating to the 2002 Gujarat riots when Modi was the chief minister of the state.

The documentary has not been screened in India.

The government had on Friday directed social media platforms Twitter and YouTube to block links to the documentary titled ‘India: The Modi Question’.

The Ministry of External Affairs has trashed the documentary as a “propaganda piece” that lacks objectivity and reflects a colonial mindset.

WHAT HAPPENED AT JNU

On Tuesday, the administration at the Jawaharlal Nehru University allegedly cut power and the internet to stop the students’ union from screening the controversial BBC documentary on PM Modi.

Later, the students staged protests and claimed they were attacked when they were watching the documentary on their mobile phones as the screening could not be held.

Some alleged that the attackers were members of the Akhil Bharatiya Vidyarthi Parishad (ABVP), a charge which was denied by the Rashtriya Swayamsevak Sangh-affiliated student body.

Later in the night, raising slogans of “Inqlaab Zindabad” and against the Jawaharlal Nehru University (JNU) administration, the protesting students marched to the Vasant Kunj police station to lodge a complaint against the “stone pelters”.

On the power cut at the campus, a JNU administration official, requesting anonymity, told PTI, “There is a major (power) line fault at the university. We are looking into it. The engineering department is saying it will be resolved at the earliest.”

ROW OVER BBC DOCUMENTARY AT UNIVERSITY OF HYDERABAD

Earlier on January 21, a students’ group at the University of Hyderabad had organized the screening of the BBC documentary at its North Campus, without prior notice.

On receiving the information, the security team and the Dean, Students’ Welfare rushed to the venue and requested the organizers to stop the screening of the documentary.

However, the organizers did not accede to this request and continued the screening of the documentary in the presence of a few students.