The housing market might be rapidly decelerating, but consumers are still spending on their homes. This is providing a surprisingly strong lift to HomeDepot (HD 2.56%). Its recent earnings report showed higher revenue, rising profits, and a brighter outlook than many expected.

Yet with the company’s sales gains coming from price hikes — rather than customers actually buying more stuff — and inventory levels rising, a housing crash could hurt Home Depot’s performance more than many believe. Rather than being an inflection point, this moment in time could be as good as it gets for the do-it-yourself home center.

Hammering down the details

Both Home Depot and rival Lowe’s had quarters that surprised Wall Street with their strength. As Home Depot CFO Richard McPhail told analysts, “We’re seeing another just interesting dynamic where with mortgage rates increasing, our customer is becoming more and more likely to stay in place and begin a project.”

It hints at the home-improvement center being recession-resistant, even if it might not be recession-proof. During the lockdown phase of the pandemic, people took to fixing up their homes, which gave the retailer a steady stream of sales to fall back on.

Yet a closer look at Home Depot’s most recent report shows the moat may not be as deep this time. If high inflation remains as protracted as many economists suspect, it will not only take a toll on consumers, but the home-improvement center may also suffer falling sales as prices rise to keep pace.

Mortgage Bankers Association data showed mortgage applications plunging 70% year over year last month, while purchase applications fell more than 41%. The Census Bureau also said that new home starts in September were down over 8% from August and 7.7% lower than last year. Housing prices have also finally peaked, as the Case-Shiller national home-price index shows prices are down for two consecutive months.

While Home Depot’s comparable-store sales (comps) in the third quarter rose 5.8% over last year, which itself had been up from an exceptionally strong 2020, all of those gains came from a 9% increase in pricing. Comparable customer transactions actually fell by 3.1%, so customers are simply paying a lot more while buying less.

That’s having an impact on Home Depot’s ability to move products. Inventory levels soared 25% in the period, causing turnover to drop from 5.7 times in 2021 to 4.5 times today.

Part of that was due to the retailer wanting to have plenty of merchandise on hand because of supply chain issues, so it increased its inventory in the first half of the year. It also reflects inflationary pressure raising the cost of the product on hand, as opposed to just having more units in stock. Still, Home Depot will need to move this inventory, which may become more difficult if the economy gets worse. 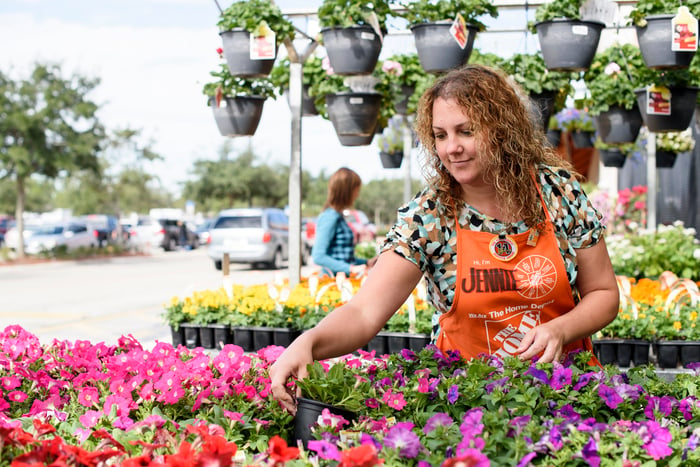 President and CEO Ted Decker says Home Depot is not concerned because the company has become what he calls a “project-oriented business.” Rather than relying on large building orders from professional customers, the company’s relying on the homeowner and contractor doing more smaller projects to keep the momentum going.

Yet that’s where the risk for the retailer lies. Persistently high prices will likely cause demand to flag. This is why Home Depot is only reiterating its full-year guidance, which indicates it’s expecting the momentum to slow in the fourth quarter.

“Our guidance implies that fourth-quarter comps will be the lowest for the year, albeit positive,” Decker told analysts. “And we have tougher comps from Q4 last year.”

That’s not to say Home Depot is a bad stock. Its business is very resilient, and even slowing growth is still growth. It’s just not exactly value-oriented at these prices, particularly after the stock price is up 16% over the past month. 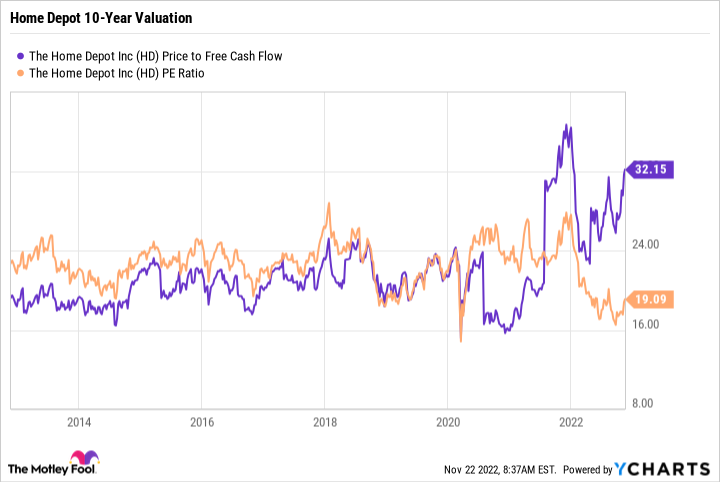 A question of value

Although the retailer goes for 19 times trailing earnings and next year’s estimates, some of its lowest levels in the past decade, Home Depot also trades at two times sales and 77 times the free cash flow it produces, some of the highest valuations over that same time frame.

I wouldn’t sell my Home Depot shares because of it, but I wouldn’t necessarily be a buyer, either. The home-improvement center is a good long-term company to own and has paid a dividend for 35 years, and it currently yields 2.4% annually. But there may be better opportunities to acquire shares in the year ahead.