Four teams have been declared the finalists in the competition to design the Portland Museum of Art campus expansion located in Portland, Maine. The finalist teams are led by Adjaye Associates, Lever Architecture, MVRDV and Toshiko Mori Architect + Johnston Marklee + Preston Scott Cohen. The project includes a 60,000 square feet expansion in the form of a six or seven-story structure planned to accommodate an increase in the number of visits and a growing collection of art. The museum is now asking for public feedback on the designs, as the projects are on view at PMA until December 11th. 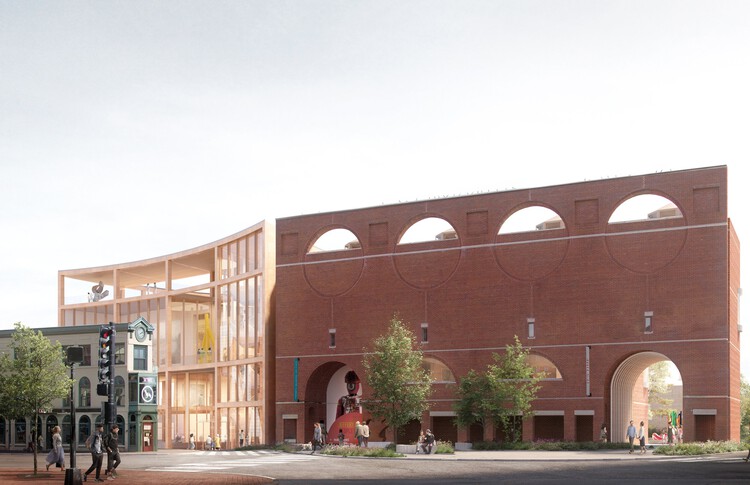 The competition included submissions from 104 teams from 20 countries, and a preliminary shortlist was announced earlier this year. The teams were asked to bring a creative and sensitive approach and a vision that would innovate the campus and bring it closer to the local community. This represents the museum’s first expansion in over 40 years. The project concludes the redesign of Portland’s Congress Square distract, a large restoration scheme funded by a capital project that has already raised more than $30 million.

Read on to discover details about the four shortlisted concept designs.

The proposal aims to weave community programming, public space and art into a robust cultural destination. The building’s main material is recycled Maine rammed earth with exposed structural timber means, acting both as interior structure and finish. This decision reduces the overall carbon footprint while creating a connection to the heritage of the museum. The opaque façade is countered by the transparent Casco Entry, an element that strives to draw passers-by as it weaves the cityscape and gardens into the fabric of the museum. The interior organization is structured as a flexible frame with a central staircase, allowing reconfiguration and acting as a wayfinding guide and an invitation to explore.

The project pays homage to the Wabanaki tradition and worldviews by creating a design informed by the position of the sun. The distinctive curved roof is created to cradle the sun during the summer solstice, while in winter, the sun illuminates the central indoor public space, creating an immersive architectural experience. The elements of the campus are all interconnected, as the project removes barriers and replaces the administrative wing with a free ground-floor public space traversing the site. The reimagined sculpture court becomes a light-filled, accessible plaza and celebratory entry to a new flexible performance space. The street also rises up to the rooftop terrace, revealing layers of art and activity.

MVRDV’s concept plans to turn the museum inside out. As the campus becomes accessible from all sides, the museum opens toward the city and invites the public inside. The campus is envisioned as part of the streetscape, the city, and the community. The intervention is also designed with respect to the existing buildings. The shape is informed by the museum programs, which are stacked vertically to create a distinctive use, atmosphere, and appearance at each floor. A public route creates connections and cultivates synergies while also creating additional interstitial spaces where the people of Portland can express their creativity. The new wing promotes exchange between the creative program and the community.

The concept is based on PMA’s Art for All mission, as generous community spaces are interwoven with 21stcentury galleries. The design of the building is inspired by Maine’s historic marine industrial architecture as well as the artist studio typology. The architects understand the value of Maine’s natural light and want to encourage visitors to experience it in an authentic way. The sawtooth skylights and glazed facades filter the light entering the galleries and community spaces. Furthermore, artist Jeremy Frey guided the campus identity to incorporate the Wabanaki basket weave into the façade design. The original portico of 142 Free Street is also integrated into the design in order to create a harmonious relationship with the Payson building and surrounding urban fabric.