The Giant Dash L200 cycling computer promises to unlock the secrets of becoming a champion of local Strava segments – and this data-rich computer is certainly one to please any data nerds. However, even though it does offer great amounts of data, the overall user experience is slightly clunky, and its reliability is not quite on a par with the best cycling computers at this price.

The Giant Dash L200 is actually powered by Stages, meaning that the Stages Dash L200 is the exact same device (though, oddly, more expensive at rrp…). Both use the Stages Link phone app for customization and data transfer, and they share the same aesthetics bar one saying ‘Stages’ on the box and the other ‘Giant’.

The L200 has a 2.7in Stages Everbrite screen which promises vivid colors and crisp detail. There is also a built-in sensor that should brighten or dim to optimize visibility and run-time in variable light – more on that below.

The screen is slightly larger than the Garmin 530’s and the same as Wahoo’s Elemnt Roam v2, which it resembles a lot in looks. You can set it so it’s landscape not portrait – if you want to have the device horizontally on the handlebar – which is a pretty cool feature, and the only one I know of that does this. 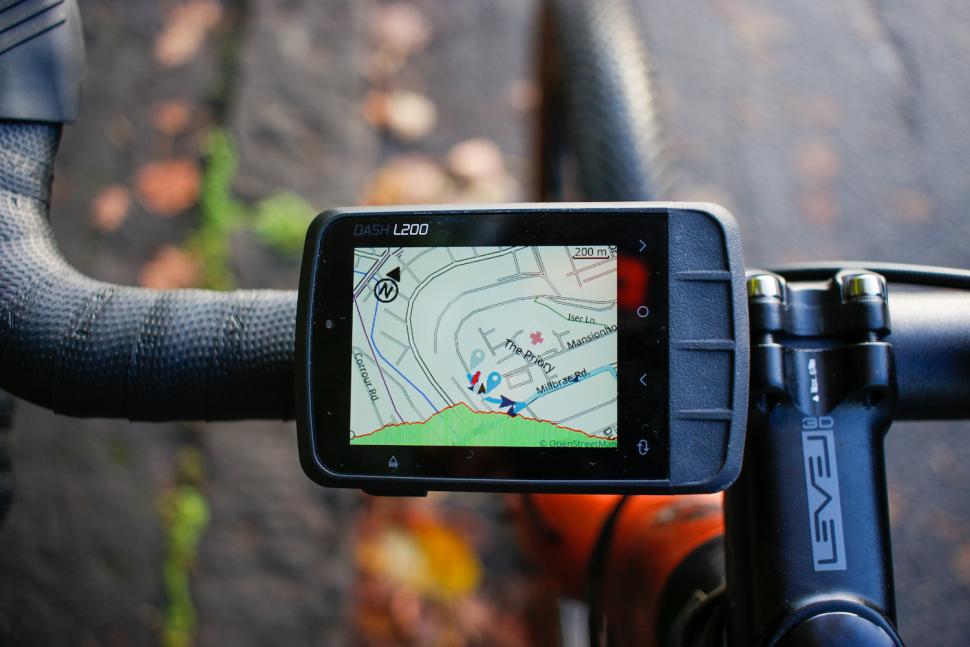 The screen size means you can really cram in a lot of data fields, and customizing them is actually a pleasurable experience in the Stages Link app – once you get the hang of it. 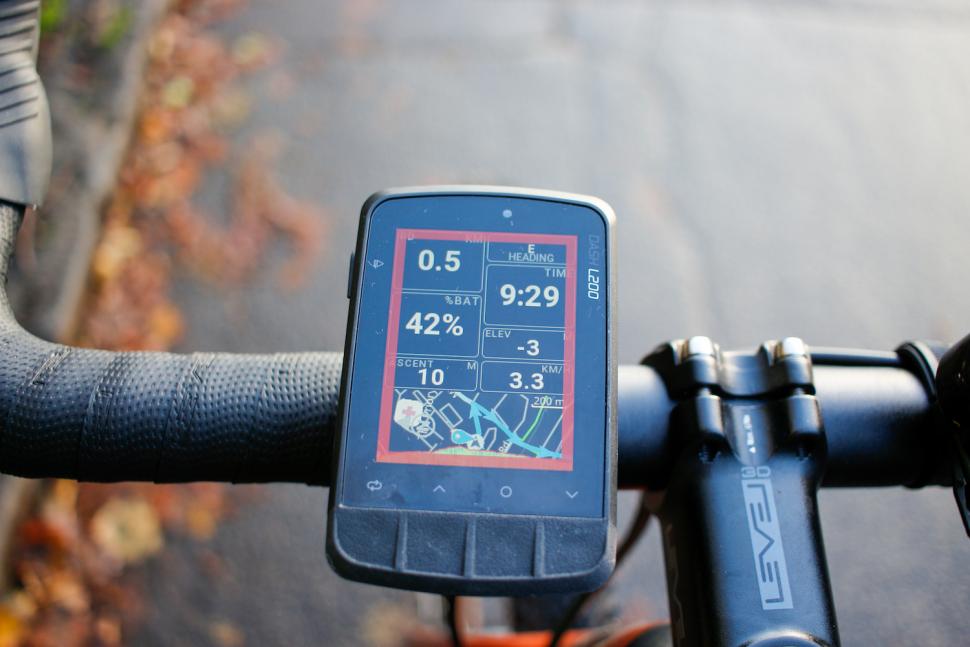 For navigating everything, the L200 has four buttons at the bottom, and one on the left side. The bottom four are made of rubber and sit quite deep, meaning dirt and water can gather in the recess. This is more of an annoyance than something that affects performance – especially as the device is claimed to be IP57 dust and waterproof – but then again, I wasn’t that impressed with their performance. They require quite a firm push, and if you’re wearing gloves it’s even harder to do. And when you do push them, the lower part of the screen seems to take an impact from it, displaying multicolored tones around it.

The force needed to navigate the buttons also radiates down to the mount, which is a typical quarter-turn design. It’s a good, universal mount that’s easy to replace if you need to, but the connection with the L200 isn’t the most secure and leaves the device with a little wiggle room. When I tried the L200 on my existing Garmin mount, it sat nice and tight. 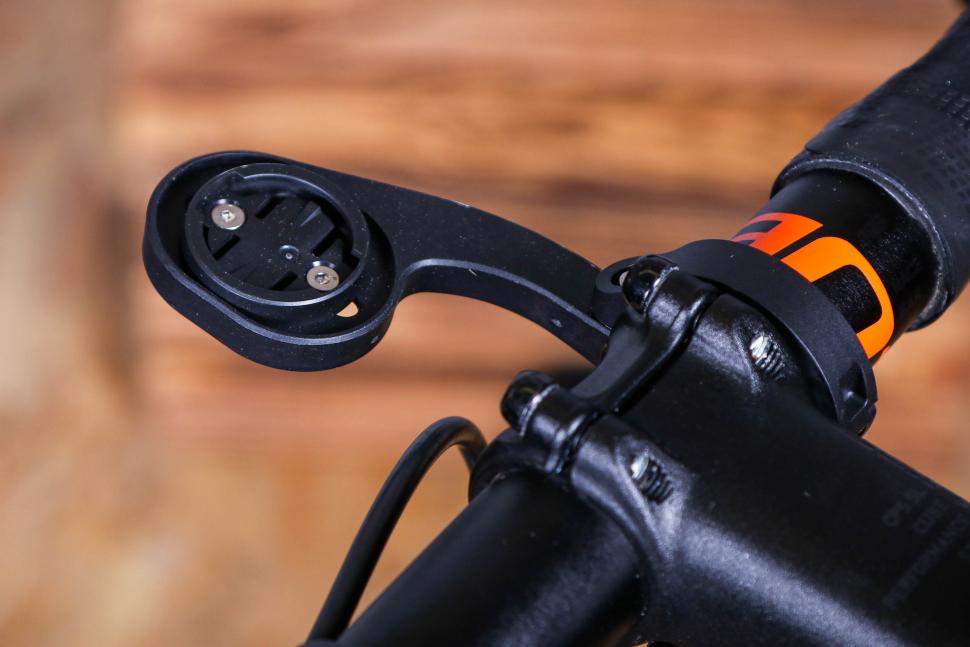 Unfortunately, the performance of the L200 was below average, and doesn’t deliver quite as much as other cycling computers in this price range.

There is no Di2/eTap connectivity – although Giant says it should be coming. For me, this wasn’t a huge downside, but the L200 definitely loses to major competitors as increasingly, this connectivity is a standard.

Giant claims the Dash L200 has a battery life of up to 24 hours with its 2300 mAh battery, and over 11 if you’re using navigation and connecting sensors. Based on my test rides, I found it just about reached the 11-hour mark with navigation and a heart rate monitor connected and the screen brightness manually adjusted to 50 per cent. In regular use, my typical 30km loop (about 1h15m ride) sometimes drained 20 per cent of the battery without any sensors or navigation, so I do not see it getting to 24 hours in many scenarios – unless you had the saving battery on. Turning on the battery-saving mode improves the battery life but limits the use of the device a lot, as it turns the screen off after 10 seconds of inactivity. 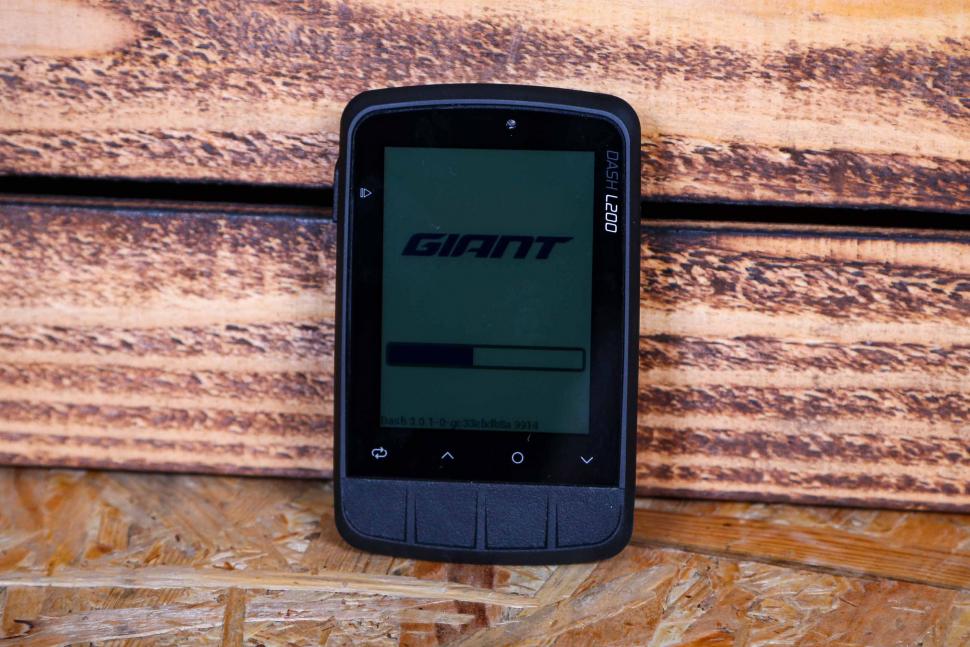 I think the biggest issue with the battery life is the screen brightness and its variations (especially the auto-brightness). More on that in a mo.

Navigation-wise the Dash L200 didn’t really blow me away, but it did the job. It reroutes in case of wrong turns, and the route is easy to follow on the screen (if the brightness stays at what you want it to be). 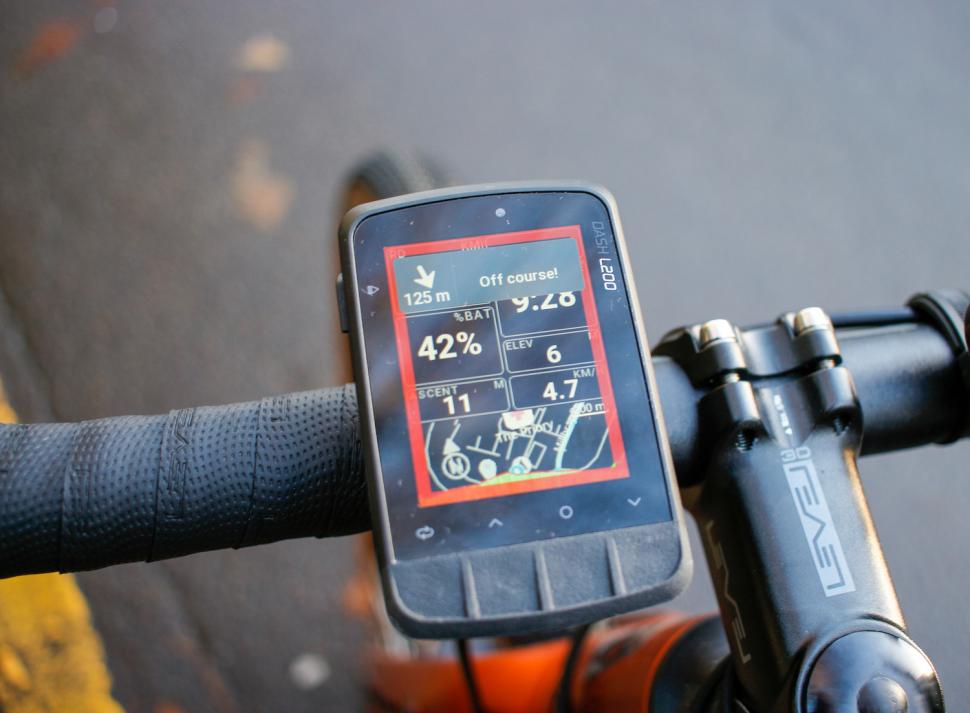 It does lack a live tracking feature, though, which I like to use on my device if I am riding in unknown areas alone. Live tracking, in devices that offer it, allows you to share a link to a friend/partner so they can see where you are and, in some cases, also see your ride statistics.

The real downfall of the L200 for me, though, was the device’s inconsistency, not only with the battery life but overall. Both the Giant and Stages versions I’ve been riding with crashed three times each in the first few weeks of testing, and although this seems to have stopped since the latest hardware updates, it’s hardly confidence-inspiring from brand new devices.

The computer also froze once when I was riding in the rain, which then resulted in the ride file disappearing – and me doing the rest of the ride without the device restarting until it was plugged in to charge.

As for the screen’s auto-adjusting mode, which I mentioned above, the light sensor is meant to decide what brightness the screen should be, but most of the time it was impossible for me to see anything on the screen, even in bright daylight. You can turn this off, though, and without it the screen was easy to read – although I prefer a more detailed map view with more color than just the route and the completed ride.

Data is really what the L200 excels at. The customization of the screens through the Stages app is really great and enables you to display exactly the numbers you want to see – even split the screen into eight wee data blocks – and the Stages App offers basic after-ride metrics. 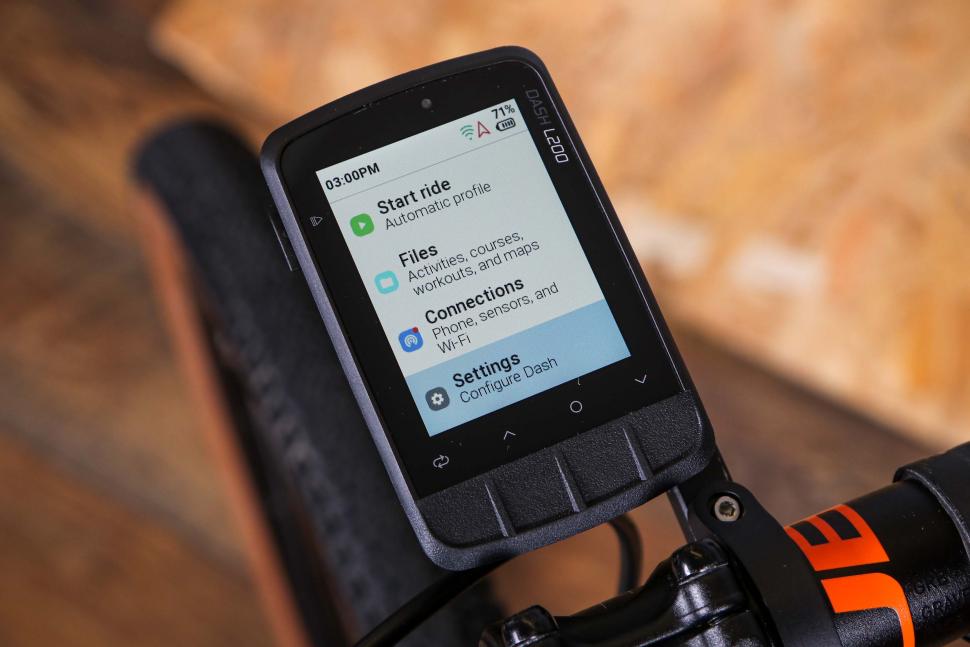 The device connects easily with a heart rate monitor, and though it is a little slow to pick up GPS signal (using GPS and QZSS with SBAS networks) it is accurate even on off-road routes.

The Dash L200 connects easily to any Bluetooth or ANT+ sensors so you can also use it with your indoor trainer for training purposes. It uses Bluetooth to sync with the Stages App and this connection worked really well, both in uploading completed rides and downloading routes. At 16G the memory of the device is standard and will take a while to get full with simple .gpx and .fit files. 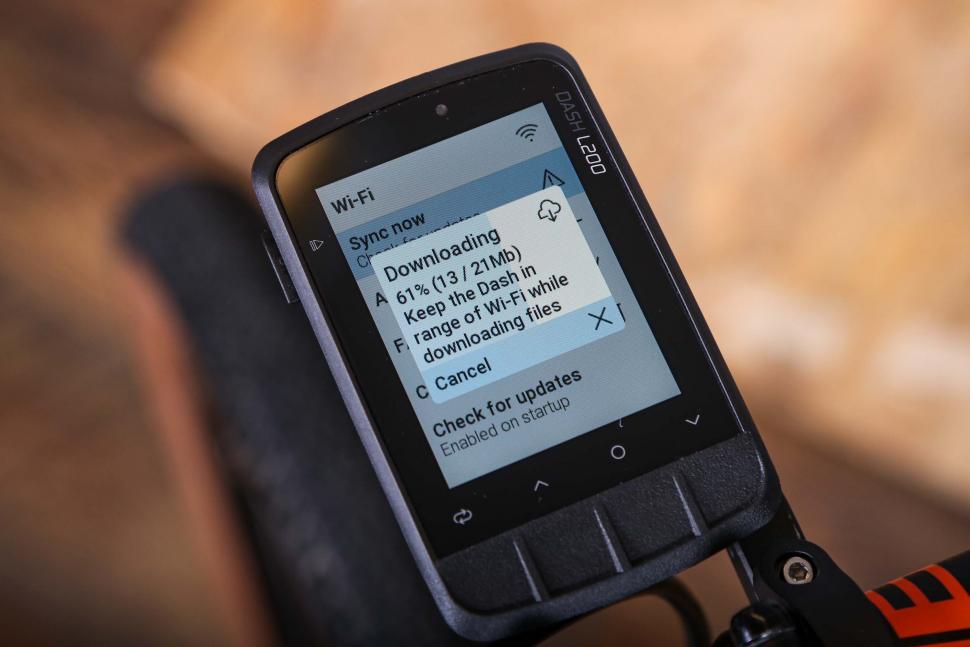 Unfortunately, the Dash L200 leaves much to be desired. Although it became more reliable through the testing period, it struggles to compete against other cycling computers in the same price range.

At £289, the L200 is £29 more than Garmin’s £259.99 Edge 530, which Rachael reviewed on our sister site off.road.cc last year and £25 more than Wahoo’s £264.99 Elemnt Bolt, which Mat reviewed last year, both of which offer far better performance – despite the screen customization being worse on the Bolt.

Overall, the Dash L200 does offer great customization and the screen is good, but if you are looking for a reliable navigation partner, this is not the best option out there.

A cycling computer with a lot of data and many promises of performance, but unreliable user experience

If you’re thinking of buying this product using a cashback deal why not use the road.cc Top Cashback page and get some top cashback while helping to support your favorite independent cycling website

Tell us what the product is for and who it’s aimed at. What do the manufacturers say about it? How does that compare to your own feelings about it?

Giant describes the Dash L200 cycling computer as follows: “The redesigned, reimagined Giant Dash L200. Built for Performance. Featuring a brilliant 2.7′ full-color screen, cycling-specific maps, and a full assortment of training features. Automatic profiles make Dash the easiest computer to use with every bike, and the Stages Cycling app makes it the easiest computer to customize. No matter where or how you ride, Dash allows you to simply hop on and go.”

I agree with some of the claims.

Tell us some more about the technical aspects of the product?

Rate the product for quality of construction:

It did stop working after a rainy ride once despite the IP57 rating… but has since been okay (and not in as much rain).

Rate the product for performance:

Rate the product for durability:

Early days, but I can’t see why this device won’t last for a long time.

Rate the product for weight (if applicable)

Rate the product for comfort (if applicable)

Rate the product for value:

It costs more than a Garmin 530 (£260) and Wahoo Elemnt Bolt (£265) and really struggles to compete against these in terms of quality, battery life and reliability.

The L200 claims to be built for performance, but it did not really perform well in terms of reliability. The screen, although good, did not work well in auto-adjusting to different light situations, and when not in power saving mode, used a considerable amount of battery.

The customization of the data screens is excellent.

Tell us what you particularly liked about the product

It looks quite nice.

Tell us what you particularly disliked about the product

The unreliable system, the buttons require too much force, and the screen auto-brightness doesn’t really work.

How does the price compare to that of similar products in the market, including ones recently tested on road.cc?

Did you enjoy using the product? no

Would you consider buying the product? no

Would you recommend the product to a friend? no

Use this box to explain your overall score

The Giant Dash L200 is a very average cycling computer. It has a great screen, offers a lot of data and customization for those who want a computer for training, but if you want a device that will navigate you home from unknown forest roads, I would steer away from this one because of the unreliable performance both in terms of the system and battery life.

Considering it feels like a somewhat unfinished product in terms of the stability of the firmware, I think it is also slightly overpriced – although if the battery life and system crashing were fixed, this could be good for someone who loves data and customizable screens.

I usually ride: Specialized Tarmac SL6 My best bike is:

I’ve been riding for: 5-10 years I ride: Every day I would class myself as: Expert