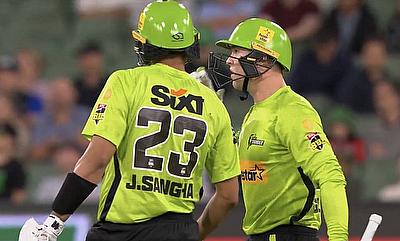 Sydney Thunder restricted Melbourne Stars to 119, however it turned into a much closer affair than they would have liked, narrowly squeaking a 3 wicket win.

Sydney Thunder utilized their bowlers to limit Stars scoring opportunities, Thomas Rogers (35) and Hilton Cartwright (36) the only ones to perform with the bat.

High expectations were placed on Australia’s Marcus Stoinis, however, he was unable to perform up to par. Stoinis has had an inconsistent journey in the Big Bash League this season due to injuries, resulting in him missing a significant amount of the tournament. The absence of the Stars’ key player, Glenn Maxwell, has greatly impacted their chances and the team is weaker without him.

Usman Qadir (3/24) was the star of this innings, as Melbourne Stars left the field on 119, setting Thunder up for a comfortable win.

In the run chase, it wasn’t as simple as Thunder maybe thought, Adam Zampa (3/25) a constant thorn in their side.

There were moments from Daniel Sams (28) before they were shut down by Zampa again, Thunder struggling for what looked an easy total to knock off.

Nathan McAndrew (12*) saw off the total as it turned into a much closer affair than it should have, Sydney Thunder winning by 3 wickets.