The TinyLlama x86 retro computer board is designed to run DOS games on a DM&P Vortex86EX 32-bit x86 processor and integrates a MIDI synthesizer based on Raspberry Pi Zero 2 running MT32-Pi firmware.

Growing up playing games on 386/486-era computers, Eivind Bohler looked for similar recent hardware to play DOS games and after discovering the 86Duino x86 Arduino-compatible board, he decided to use the SOM-128-EX module powering the board to create the TinyLlama board with a Sound Blaster Pro-compatible Crystal CS4237B sound chip and a MIDI synthesizer. 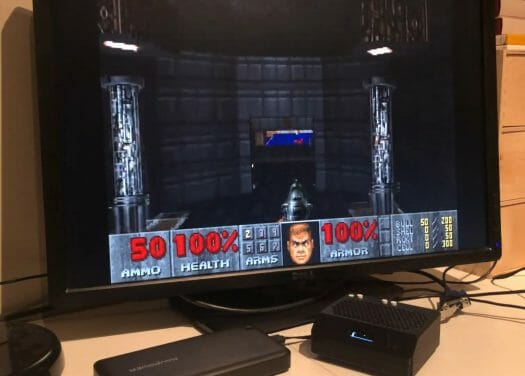 The system features a custom Coreboot/SeaBIOS ROM, and is mostly designed to run MS-DOS or FreeDOS. There’s also a 3D-printed enclosure to make it look more like a mini PC or game console. The design is open-source hardware and you’ll find the KiCad schematics and PCB layout, source code for the BIOS and CS4237B firmware, files for the 3D printable enclosure, and documentation on GitHub. You can also follow the development and/or ask questions on Vogons forums.

If you don’t feel like building the TinyLlama by yourself, Eivind had 24 kits for sale last month, but I would suspect they are all gone by now…

Jean-Luc started CNX Software in 2010 as a part-time endeavor, before quitting his job as a software engineering manager, and starting to write daily news, and reviews full time later in 2011.

Support CNX Software! Donate through cryptocurrencies or become a patron on Patreon