Belonging to the Sirenia family, Dugongs are herbivores that feed on underwater grasses day and night with their bristled snouts. Wikimedia Commons

There is more good news for the animal planet in India. After reintroducing the once-extinct cheetahs, the country is now doing all it can to conserve the dugong, the largest herbivorous marine mammal, also known as the sea cow.

India is getting its first Dugong Conservation Reserve and it has been notified in Tamil Nadu, according to a statement by the state government. The move is aimed at preserving the vulnerable species, which in turn will improve the marine fauna in the country.

Supriya Sahu, additional chief secretary of Environment, Climate Change and Forests for the government of Tamil Nadu said, “We have scripted history and this is yet another milestone in the conservation history of Tamil Nadu. The notification is a very proud moment for TN Forest Department and conservationists across the globe.”

Belonging to the Sirenia family, they are herbivores that feed on underwater grasses day and night with their bristled snouts, according to National Geographic. The sea cows can stay underwater for six minutes before they surface to get air. Wikimedia Commons

The sea cows can stay underwater for six minutes before they surface to get air. They sometimes breathe by standing on their tail with their heads above the water’s surface.

Going by the scientific name of Dugong Dugonthese mammals prefer spending much of their time in isolation.

Where are they found?

According to the Wildlife Institute of India, dugongs are found in the Gulf of Mannar, Palk Bay, Gulf of Kutch and the Andaman and Nicobar Islands. Currently, their population in India is about 250.

Around the world, dugongs are found the most in Australia where their population stretches from Shark Bay in Western Australia to Moreton Bay in Queensland. According to the Society for Marine Mammalogy, the dugong population in Shark Bay alone is thought to be over 10,000.

The Persian Gulf has the second-largest dugong population in the world. It’s home to around 5,800 to 7,300 of them.

Why is India getting a dugong reserve?

The sea cows are protected under Schedule 1 of the Wild Life (Protection) Act of 1972.

According to a report by DownToEarth, dugongs consume up to 40 kg of seagrass in a day. With the rise in the loss of habitat owing to coastal development projects, the animals face the risk of extinction.

Apart from this, human activities such as pollution, illegal fishing activities, hunting or poaching also threaten the dugong population.

The population of the sea cows used to be prominent in the waters off the coast of Odisha, West Bengal and Andhra Pradesh two centuries ago. But now, they have gone extinct in these areas, a senior scientist at the department of Endangered Species Management in the Wildlife Institute of India told DownToEarth.

What do we know about the reserve?

The announcement for the establishment of the reserve to be set up in the Palk Bay region off the coast of Tamil Nadu was made in September 2021. It is a big step toward protecting the species and its marine habitats. 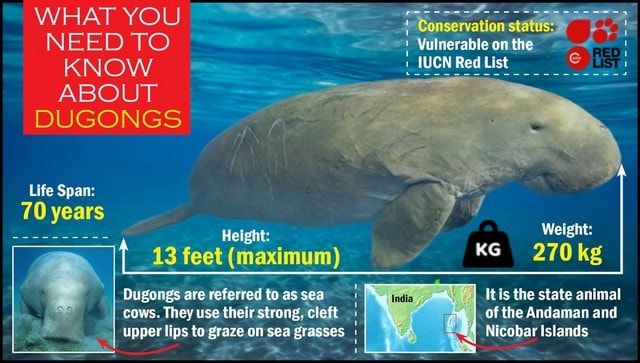 The reserve will spread over the northern part of the Palk Bay region between Adirampattinam in Thanjavur and Amapattinam in Padukottai districts and will cover an area of ​​448 sq km, according to a report by The Hindu.

A total budget of Rs 25 lakh has been allocated for carrying out the project.

Palk Bay is a shallow bay that provides the ideal habitat for dugongs, dolphins, porpoises and even turtles. According to a report by The New Indian Expressofficial data shows that the coastal areas between Thanjavur and Pudukottai districts in the bay are covered by 12,250 hectares of seagrass beds, which is the main source of food for the sea cows.

Chief Wildlife Warden, Srinivas Ramachandra Reddy, has ensured that traditional fishermen who depend on coastal waters for their livelihood will not be affected by the establishment of the reserve. “We held extensive consultations and took fishermen communities into confidence,” he said.

A total of 45 fishing villages in both districts have accepted the proposal.

What is the status of dugongs in other parts of the world?

Dugongs are listed as Vulnerable on the IUCN Red List of Threatened Species. The loss of seagrass habitats, water pollution and degradation of the coastal ecosystem due to developmental activities have made life tough for these slow-moving animals. Dugongs are also victims of accidental entanglement in fishing nets and collisions with boats and trawlers, reports The Indian Express.

Last month, the species was declared extinct in China due to shipping accidents and fishing.

With inputs from agencies